After thoroughly studying amisduchamp.com (the website of the park), I started making frequent visits to the site, exploring the amazing variety of plant species, various locations in the site to see what they offered (spatially and their affordability) for my intervention, and talking to residents that picnic there or bring their dogs for a walk.

What bothered me at first sight was the amount of garbage gathered around the remains of a camp fire in the middle of the park (by the big tree). As one of my original ideas, I though about hooking up a motor to a tree trunk and connecting a series of invisible threads to it, and attach every piece of garbage that I found to the wires. What I imagined was a very very slow rotating tree trunk pulling pieces of garbage off the ground, cleansing the site over the period of a day. The end result would have been this tree trunk covered by garbage. I wanted to make a stop-motion of the process and present that.

My second idea was a musical garbage can, inviting people to come to the park to make some noise and clean up after themselves (please see the future section of this website for musical benches, rain barrels and other ideas). 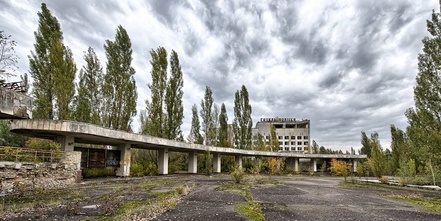 Ric Wright, BBC Photographer (CLICK FOR LINK)
Even though it may seem that an apocalyptic vision of a world without humans would mean cities would start going rapidly towards being covered by plants and trees, the existence of so much hard materials covering the earth makes this process much slower than what I imagined. We can see this in Pripyat that has been deserted for the last 27 years.

This train of thought was the starting point to my actual intervention: regeneration of plants made possible through a specific set of ecological circumstances as well as human interventions...

"Another way of looking at the desolation of Pripyat is how things could be in 27 years at other sites around the world, such as the area around Fukushima in Japan, as well as how the world would look after more than 25 years without human intervention, when nature reclaims cities" (Wright)

After exploring various sites in the Park I started becoming more and more obsessed with the train tracks. This was due to a number of important reasons. For me the tracks signified the transformation of the brownfield into the space it is today. One way of looking at it would be through Alen Berger's concepts of waste and landscapes of waste as a product of human growth. The idea that this land was left unpaved and uncovered due to the services it provided CN during 19th and 20th century. Another fact is the various number of species that was introduced to this site through the occasional droppings of seeds from trains, seeds belonging to all over the map. 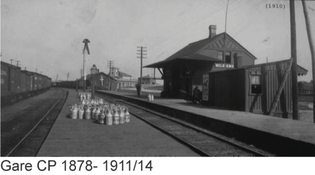 Train tracks by Champ-Des-Possibles in 1878 (CLICK FOR LINK)
I walked back and forth from one side of the tracks to another exploring and thinking about the relationship the two parks have with one another. I thought of how nice it is to have a green space that is not appropriated like the other side with the grass trimmed, every plant designated a spot, etc.. Thoughts of how wild, natural and without human intervention Champ Des Possibles is started occupying my head. Then I realized, without intervention? So what I aimed to explore with my intervention was the various levels of human intervention and the many factors that made this space possible: industrialization, CN, specific conditions in the dirt (soft vs hard spaces), various degrees of community involvement (from the creation of Roerich symbol into the landscape, Mile End committee meetings, personal interventions, research and etc.), and last but not least the plants amazing ability to adapt and strive for this regeneration. 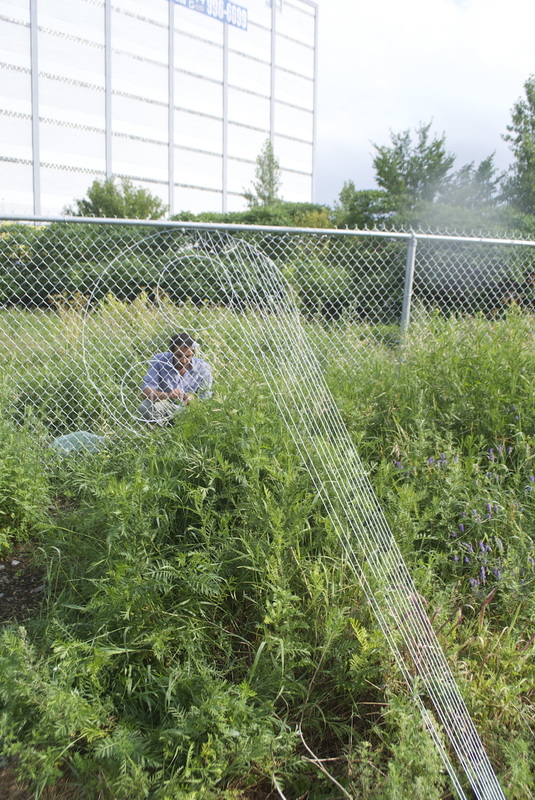 process
I picked the fence because it hinted towards this struggle for life and growth while allowing me to visualize the vast network and connections that helped this process of struggle and in the end protected it.

As shown above the origin of threads springs and cones out from the tracks. Threads spring from where I was going to plant a Virgina Creeper and help them cling on to each node around the outer circle of the Roerich symbol. While the Virginia creeper is known for its fast growth and ability to cling onto anything in its way, the threads went on for a long way, so I was excited to see what percentage of the vines would make it over.
I was hesitant in using a symbol that Emily Rose had once used for her project, but I really wanted to point towards the involvement of the community in helping preserve this site, and the symbol had come to represent this community amongst Friends of Field of Possibilities. 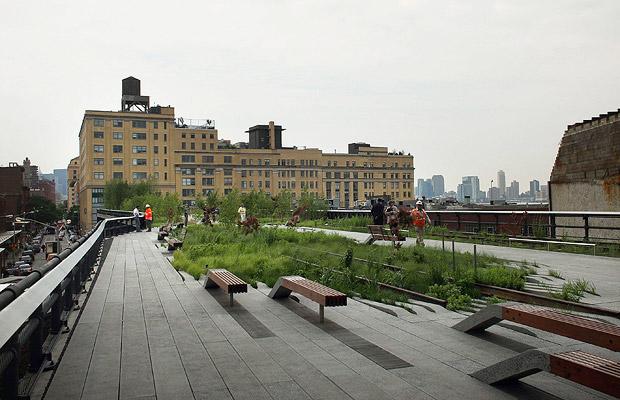 Roerich Symbol as used by Emily Rose Michaud in her project at Champ Des Possibles (Source: amisduchamp.com) (CLICK TO ENLARGE)
I spent two days working on the installation. The second day when I had completed about 90% of the project I got stopped by security and was asked to remove the threads immediately. So I was interrupted in the process, but this disassembly created an intervention of its own. 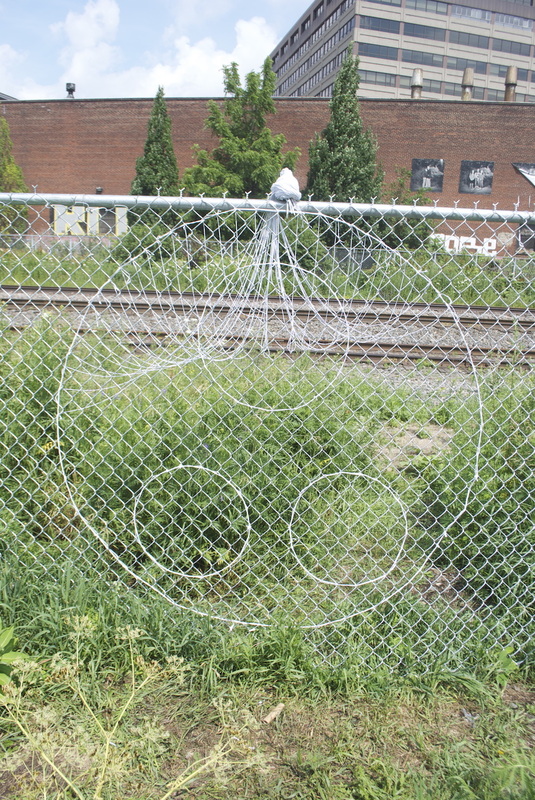 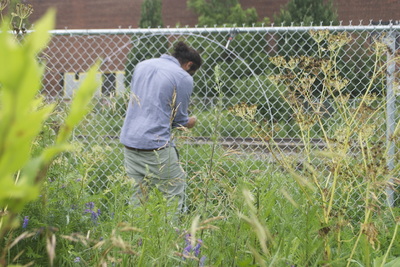 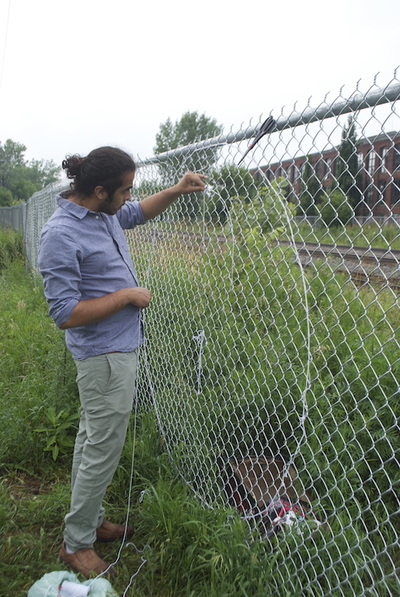 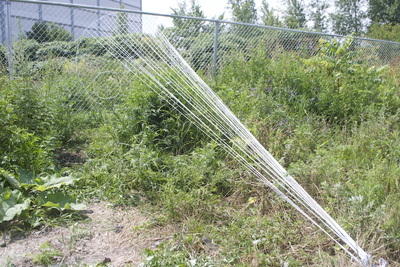 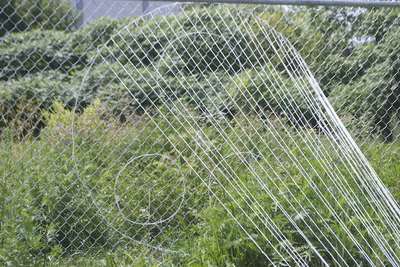 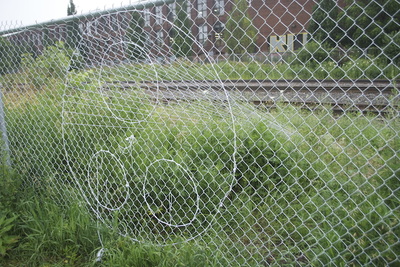 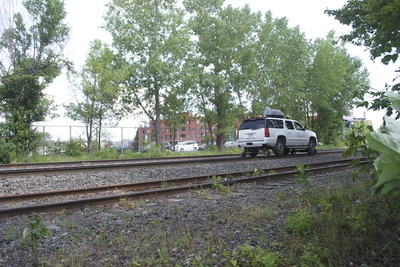 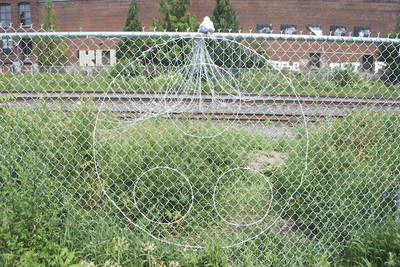 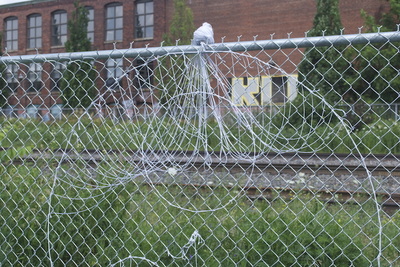 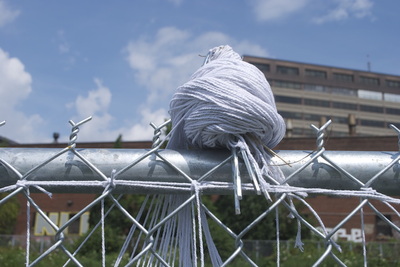 gentrification of lachine canal
a digital graffiti project
For my second intervention, I took my research and work into Thomas Strickland's Spaces of Health & Sickness course. The intervention was handed in as my final project. I created a separate website for this project. Please excuse me, since this decision was against our original plan. I made this move because I thought the canal would be a great space to look into as a site of health and sickness.

Please go to the project site by clicking the link above. The digital graffiti project looks into the gentrification of Lachine Canal and the many narratives behind current development plans. 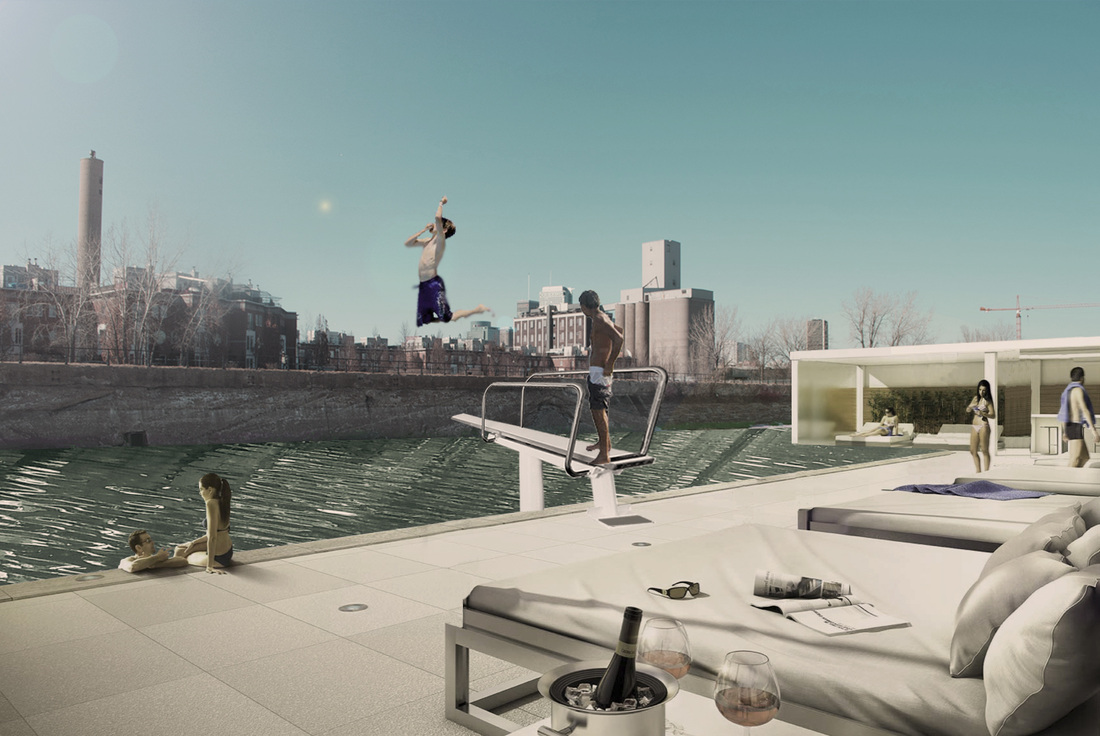 'Swimming in Dirty Waters' by Nima Navab (CLICK TO ENLARGE)

'A Different Kind of Labor' by Nima Navab (CLICK TO ENLARGE)

'Spaces of Conflict' by Nima Navab (CLICK TO ENLARGE)